St. Louis Says Hello to Hockey and Good-bye to a Legend

After a long lock-out, the NHL resumed this past weekend which mean that hockey was finally back in St. Louis.  I had mixed emotions going to the game.  Of course, I was glad that the issue was resolved because I love hockey and have missed it but a part of me was still annoyed that the millionaires vs. billionaires saga had really put the "normal" people who pay their salaries on the back burner.  Having said that, I was excited to not only go to the game but to finally have something to watch on TV at night.  LOL 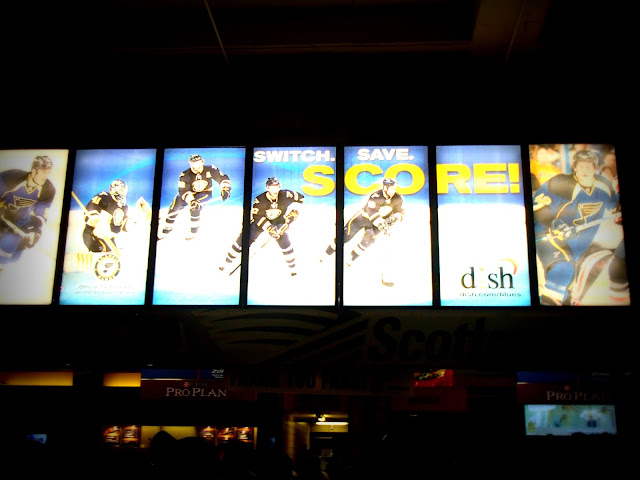 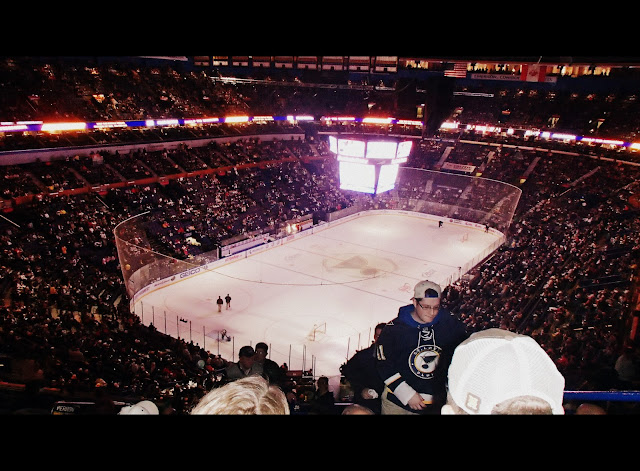 Scott refused to wear any Blues or NHL gear to the game "in protest".  He did, however, somehow manage to still wear blue to the game.  He's such a rebel.


(Side note:  I hate taking pics of myself.  I always have a forced smile and really push my eyes out) 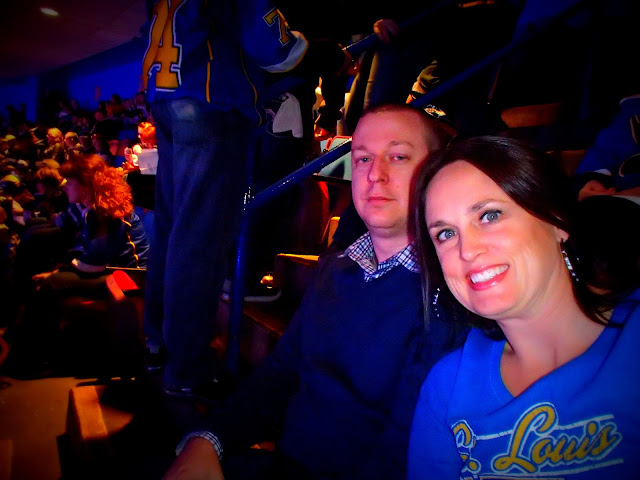 The pregame showed definitely got the crowd fired up. 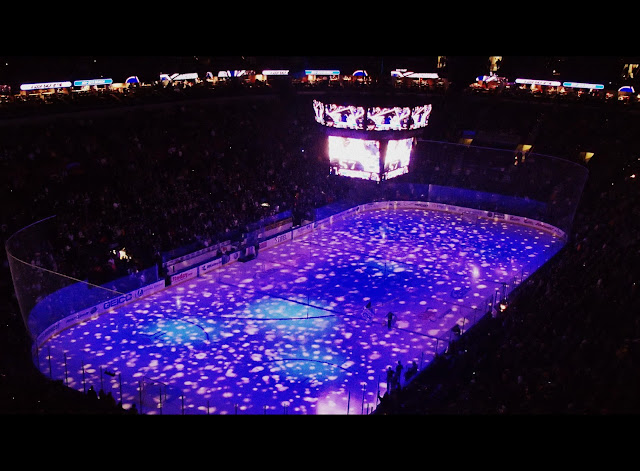 Here we are with the Bluesiers that we sit by.  Yes, we have the cheap seats and wouldn't trade them for anything. 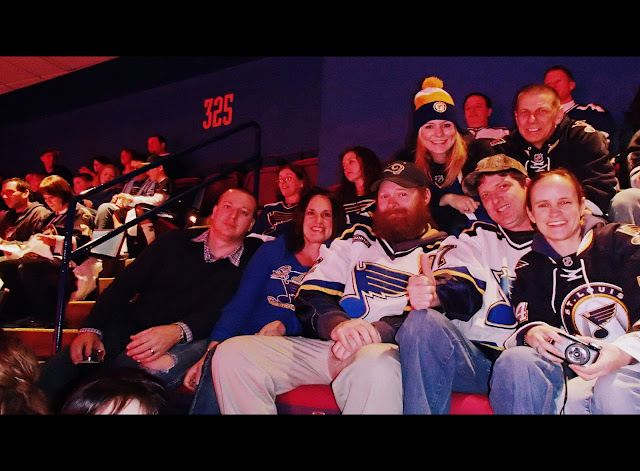 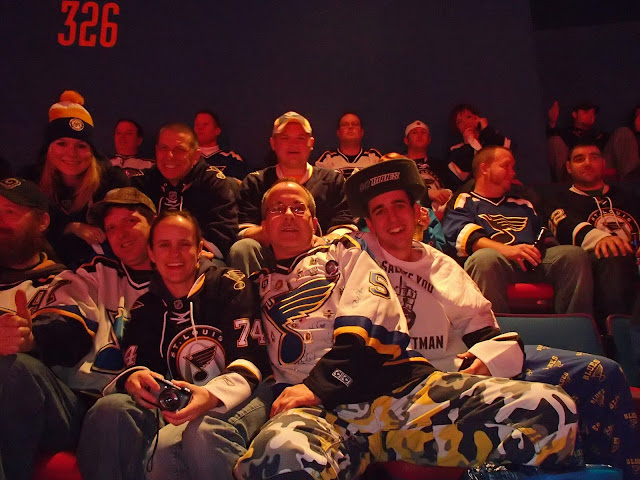 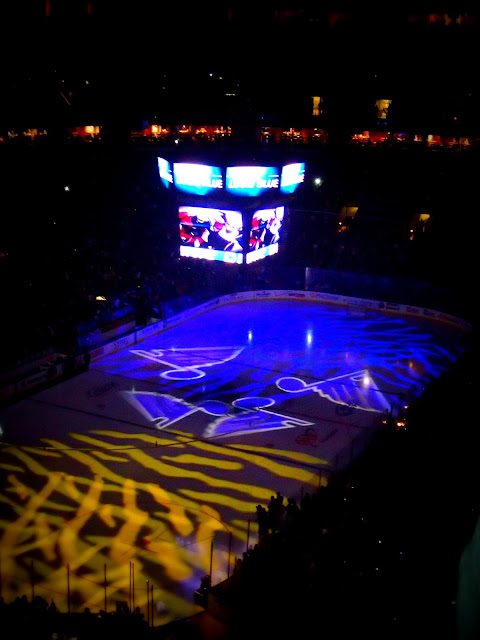 The Blues put a spankin' on the Red Wings . . . something that hasn't happened in a long, long time.  Definitely a highlight was seeing Tarasenko score 2 goals in his first ever NHL game.  "Frank the Tank" was on fire. 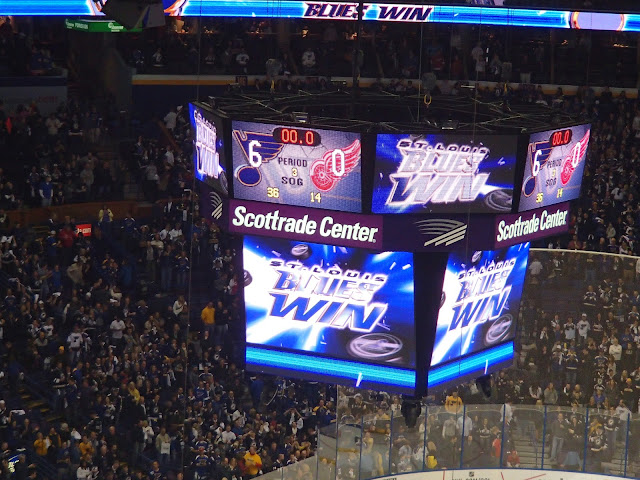 The score was 6-0.  The number 6 is very important to St. Louisians as it is the number of Hall of Famer Stan Musial.  Sadly, on this very Blues home opener night, Stan the Man passed away.  How fitting that the Blues would score 6 goals.

Scott Trade paid tribute to Stan during the 2nd intermission and then after the game, they left this up on the scoreboard. 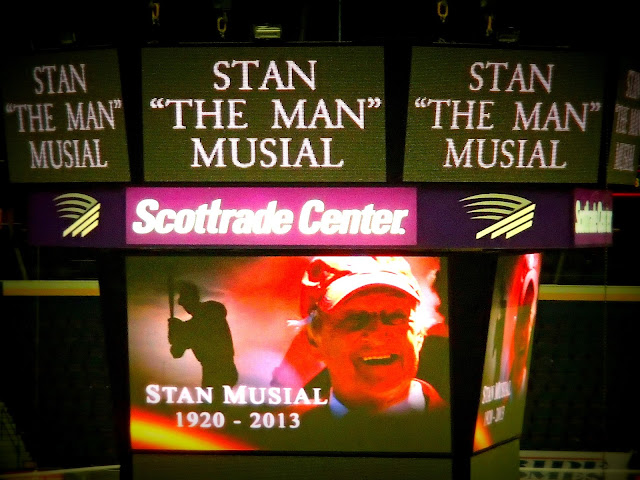 When we left, we drove the couple of blocks down to Busch Stadium and the memorial had already begun.  Tons of Cardinals' fans, a lot of them straight from the Blues game, were gathered around Stan's statue and were leaving flowers, balloons, hats, and cards.  It was sad and touching to see so many people show up so quickly to pay respects to him. 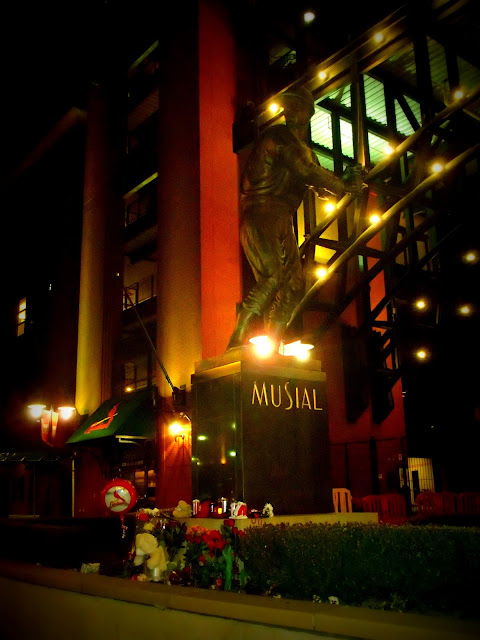 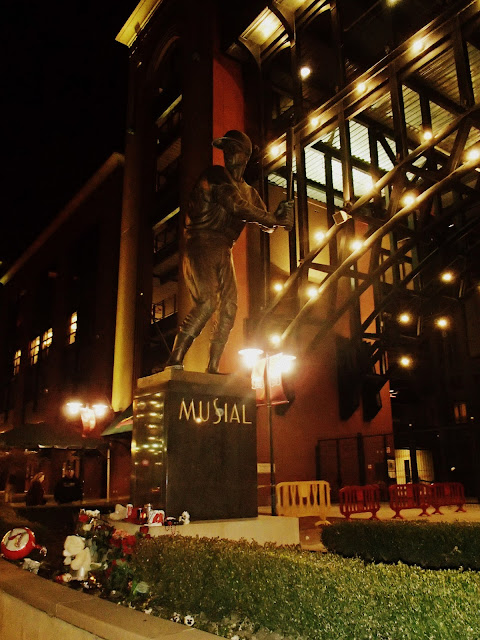 Posted by April Westerhold at 11:34 AM 4 comments:

Saturday night Stan "The Man" Musial died.  For those of you who do not live in St. Louis, or who may not be big baseball fans, this may not mean anything.  To a St. Louis Cardinals fan, though, it is so sad.

Stan Musial is an icon in St. Louis.  There are 2 statues (1 giant one and 1 smaller) of him outside of Busch Stadium.  Every Cardinals fan who has ever gone to a game has told someone to "meet me at Stan" and at any given time on any given day, you can drive by and there will be fans walking around his statue and taking pictures.

To me, Stan Musial was a connection to the past.

A connection to innocence.

A connection to a time that when people got married, like Stan did to his Lil for 71 years, 11 months and 9 days.

A connection to a time when baseball players were also real people who cared about the fans and the team as much as their own paychecks.

Most of all, though, he was a connection to a generation that will forever be lost.  Whenever I saw Stan I would always think about my Granny and the fact that she used to watch him on TV and listen to him play on the radio.  She loved baseball and so seeing him made me feel a little closer to her.

When I was told the news Saturday, I really couldn't believe it.  Even though he was 92 years old and had declining health for the last few years, I always knew that Stan would be there again on Opening Day or (hopefully) during the playoffs.  I always made sure to get to the games early when I knew Stan was going to be there because I couldn't wait for him to ride by and wave.  I feel so lucky to have just experienced it one time.

After this past season, I knew that it wouldn't be long until this day would be here.  It was evident that Stan was not doing well but yet he fought through to give all Cardinals fans that one more special day.  I am grateful for that.

Rest In Peace, Stan.  You will always be in our hearts. 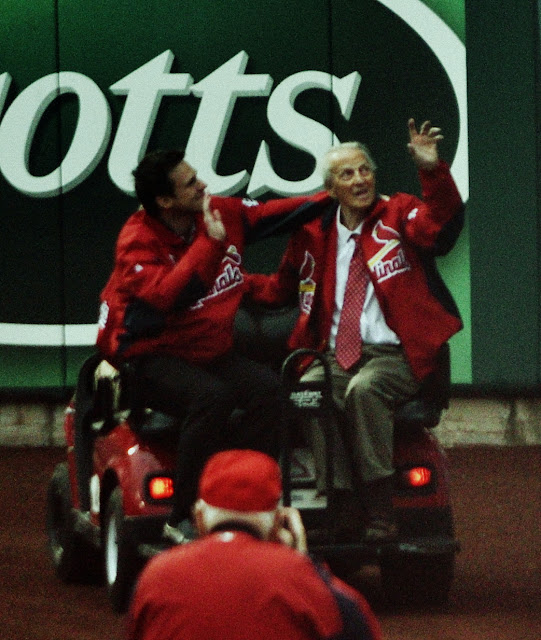 CrossFit has changed my life in so many ways.  I have realized that I am stronger, both mentally and physically, than I ever thought possible.  Like most new CrossFitters I have been envious of the other athletes in my box with their constant PR's, RX'ing every WOD, and their Kipping pull-ups.  Each day that I went in, I would try to increase my weights, increase my reps, and increase my time.

This past week, though, I came to the epiphany that most CrossFitters come to, I have been compromising form to overcompensate my ego.  Bottom line, I really haven't been helping myself by rushing through the WODs with heavier weights rather than staying at a lower weight and really getting the entire movement.  So, I decided to make some changes. . .

Earlier in the week during the Strength (weightlifting) portion we were doing back squats.  Normally, I would look at my max and then scale down the percentage from there.  In doing that, though, when I hit the 85% mark, I know that I would not have had good, true, complete range of motion.  Instead, I started at worked my way up to the heaviest weight that I could and still have good, true, complete form.

In talking with my trainers this week, it seems that almost all CrossFitters go through this period and have gone through this same process.  They have all told me that while initially I will go down in weights that I will actually see more results from doing the movements properly rather than just throwing heavy weights around.  I sure hope so.  I know that in the last couple of workouts, I really have focused on the movements and I have felt it more with lighter weights than I did by using the heavier ones.

I guess this shows that even though I have found the right workout for me, there is always going to be room for improvement, room to grow, and room to learn.

Have you had to start over with a workout?  Re-set not only your mind but your body, too?  I remember having to do this when I was running a lot, as well.  I'd love to hear about your fitness stories.

Posted by April Westerhold at 11:03 AM 3 comments:

Why My Weekend Sucked

Ok, maybe that title isn't really accurate.  This weekend in Vegas did not suck.  I mean, how could it?  I was with my Hottie Scottie on a kid-free weekend with great friends.  Maybe I should have said, Why This Weekend in Vegas Was Different Than Every Other Weekend in Vegas and Why I Wish Circumstances Weren't What They Were . . . but that would have been a really long title.

Things started off by me getting the sad news that my aunt, Sue, passed away somewhat unexpectedly on Thursday morning.  Sue had been sick for several years but in the past couple of weeks she became really ill.  I guess that I, along with the rest of the family, just thought that it was like all of the other times where she would bounce back.  Unfortunately, this time it wasn't meant to be and so we were all shocked to realize that she was actually gone.  Because of the way the weekend was set up, I wasn't able to cancel my trip to attend the funeral.  So as I sat there in what I always lovingly refer to as my second home, all I could think of was being back here in my real home and saying good-bye to her.

Having Sue and the funeral on my mind was the main reason why this weekend was different but the weather in Vegas this weekend sucked, as well. UGH.  Are you serious?  It was 22F on Saturday morning and this was during the day.  You can imagine how cold it was at night.  It was warmer in St. Louis than it was in Vegas.  It was miserable, bone-chilling, see-your-breath, put on your winter parka cold.  I was prepared for it to be in the 40's or 50's . . . not in the teens and 20's.  It just really changed our whole "strategy" (and YES, you DO need a strategy) on Vegas.

Having said all of that, we had a great time with the neighbors (as usual).    They are always good for a good time. 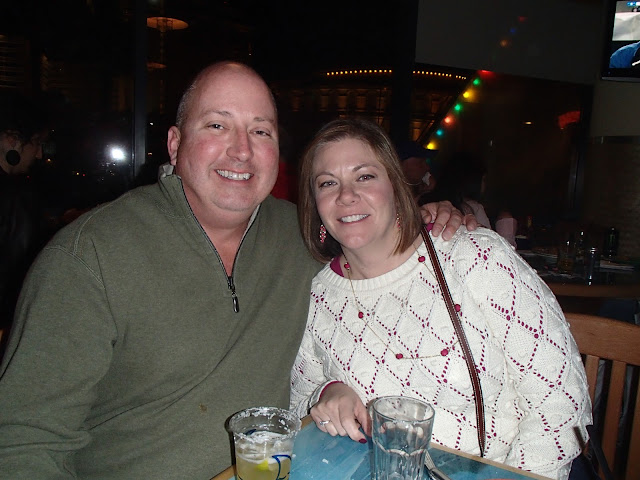 Corey and Ann, my neighbors 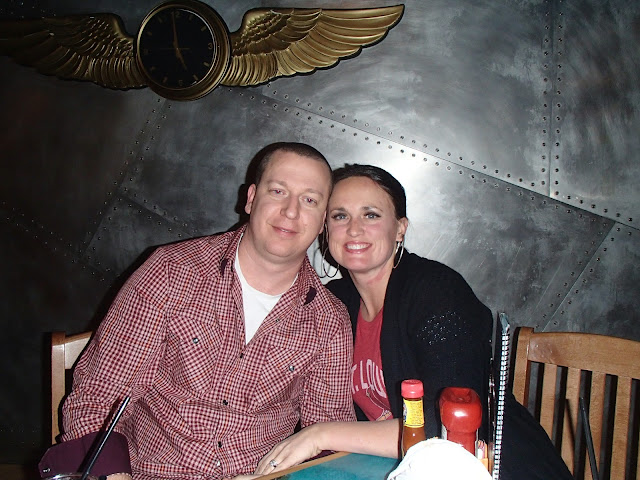 Hottie Scottie and Me at Jimmy Buffett's.  Tip:  Order the Chicken Nachos.  I swear . . . just do it. 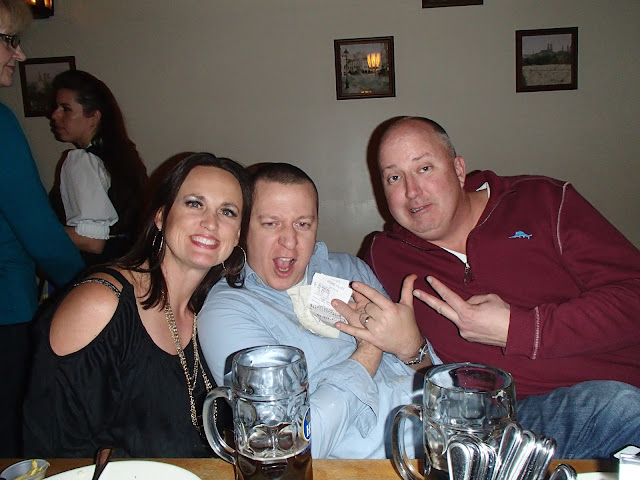 This is what I deal with.  This is at the Hoffbrahaus.  Tip:  Go.  Ask for Michelle from Germany, last name is being protected :)

On a somber note, I want to end this post with a video of my aunt Sue giving her testimony in church.  This was taped just within the last couple of months.  I am told that instead of the traditional sermon at the funeral, the officiant spoke a few words and then played this audio wherein, essentially, Sue gave the sermon at her own funeral.  The family all say that it was very fitting and very much an appreciated part of the funeral.

While I am so sad for my dad (she was his baby sister), her husband, kids, grandkids, and all of the extended family I am equally happy for the fact that she is no longer in pain.  In the last couple of years she was bound to a wheelchair because of an amputation due to the lack of blood flow to her leg.  She had rheumatoid arthritis, heart disease and countless other things wrong.  She is finally no longer in pain.


No truer words have ever been printed on a t-shirt about CrossFit.  Some of the most inspirational, motivational, emotional moments have come at the end of a WOD (Workout of the Day) when there are only one or two athletes still pushing to finish.

Yes, we are each in charge of our own fitness and it takes effort and tons of sweat and even some tears to reach our goals.  But, I compare CrossFit to when I was in the Army.  We don't leave anyone behind.  We aren't finished until the last person finishes and in that moment when they complete that last thruster, throw that last wall ball, or Kip that last pull-up . . .that's when the WOD is over and that's when I know that it is all worth it.

Hello Faithful Readers~
I try to be a fashionista but, to be honest, it takes a lot of effort and it really isn't my forte' so I thought I would come to you guys to see if you could give me some advice and tell me the products that you all use.

1. What kind of moisturizer do use?

2.  What are your favorite on-line shopping sites for women's clothes?  I have ordered boots and purses from JustFab.com for a while but I'm looking for other sites to check out.


3. What brand makeup do you use?  I have used Bare Minerals for years but I am looking for a different brand?

5. Not necessarily a fashion question but . . .Food is a huge issue in our house.  I don't eat pork and Scott doesn't necessarily like seafood . . . this leaves us with basically chicken and beef.  I am looking for healthy (even gluten-free/paleo) recipes.  Any favorite sites?

Thanks for your help!

Posted by April Westerhold at 9:37 AM 2 comments: