Stan the Man Receives the Medal of Freedom Award

When a St. Louis Cardinal fan is born, a new fanatic enters the world.  Cardinal fans eat, breathe, sleep Cardinal baseball.  There is nothing like going to your first Cardinal baseball game and a
Cards vs. Cubs game . . . "Fughet about it."
Part of being a Cardinal fan is knowing and loving the history.  We respect our former players and they respect us.  Retired players buy homes in St. Louis, start businesses, and become part of the community.  Their children go to our schools, they show up around town at charity functions.  We love the Cardinals and the Cardinals love us.
Today was a proud day for all Cardinal fans.  The Greatest Cardinal of Them All, Stan "The Man" Musial received the Medal of Freedom﻿ from President Obama.
You can watch 2 videos of it here:
President Obama speaks of Musial
Stan Musial receives his Medal
To the outsider, you might wonder why would a stay-at-home mom care about some old guy getting this award but you would have to be a St. Louis Cardinal fan to understand.
Stan Musial IS baseball in St. Louis.
Even though he is over 90 years old and I never saw him play, I am proud to root for the same team that he played on for 22 years.  Here is a great site with tons of facts on Musial.
On Opening Day every year, the Cardinals do a Player Parade.  The Hall of Famers always go first and it is always such a thrill when Stan rides around the park.  It honestly brings tears to my eyes. 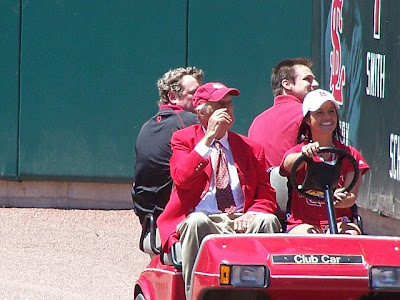 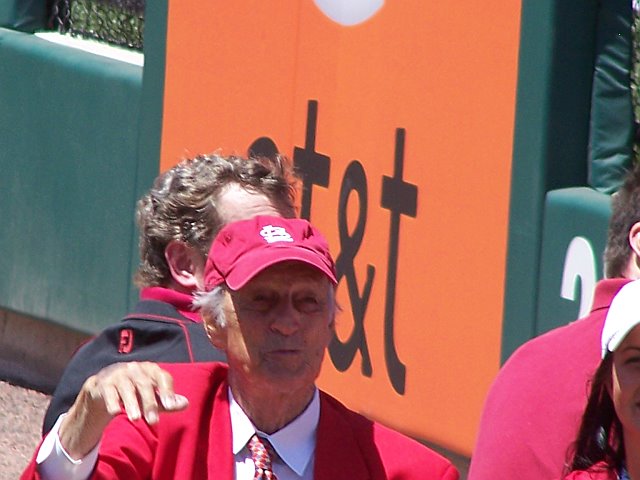 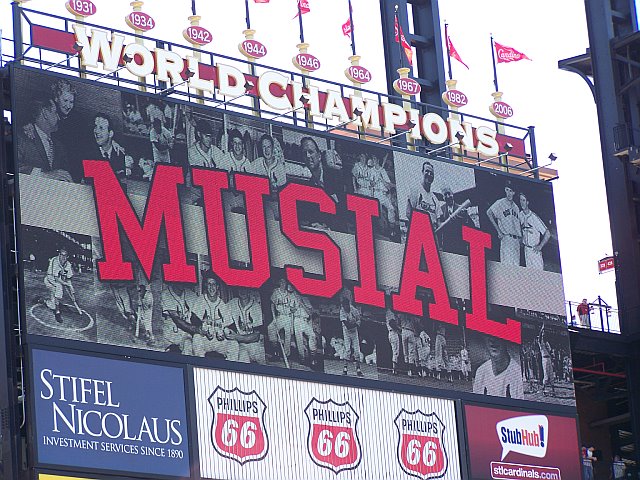 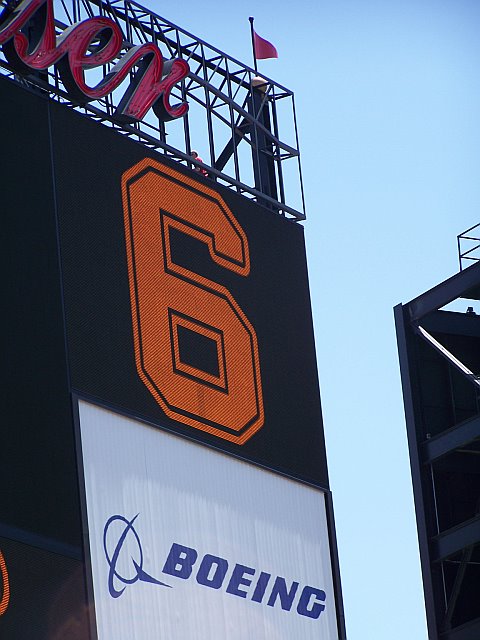 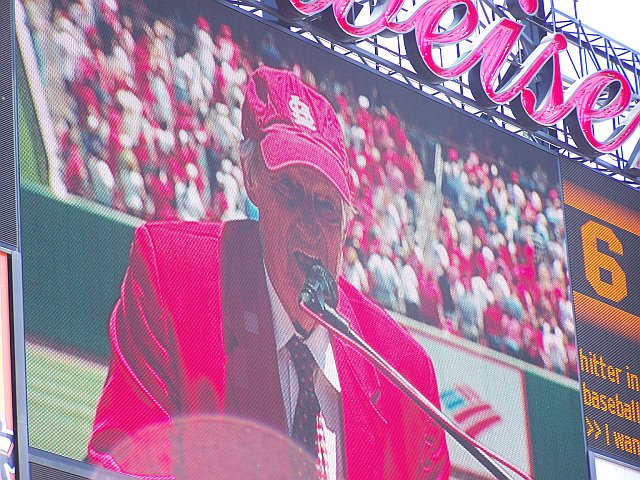 I think just to be in his presence for a split-second gives you a connection to simpler times, to innocence, to when the game was pure.  It is bittersweet to see old videos of him hitting one out of the park and running around the bases and then to look at him now and see that he needs help getting around.
There was a statue of Stan the Man at the old Busch Stadium and they moved it over to the new Busch, as well.  That statue is a landmark not only to the greater area of St. Louis but to the actual ballpark.  "Let's meet at Stan before the game."  Fathers and sons take "1st baseball game" pictures in front of Stand.  Wedding pics are taken in front of Stan.
My wedding day was the first day of the World Series 2006.  We headed to Busch to take pics and, of course, we had to take pictures in front of Stan. 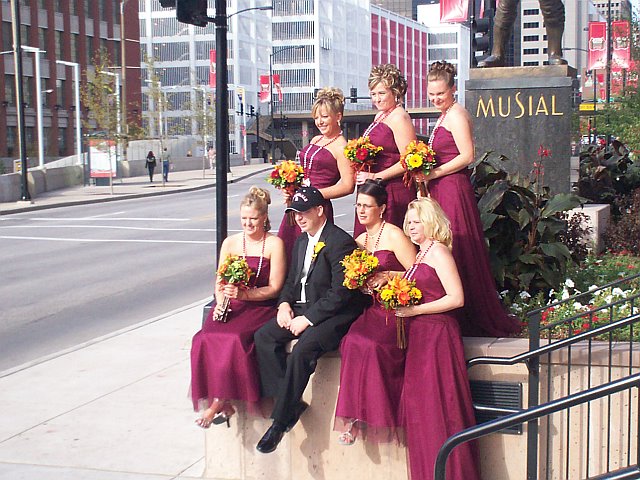 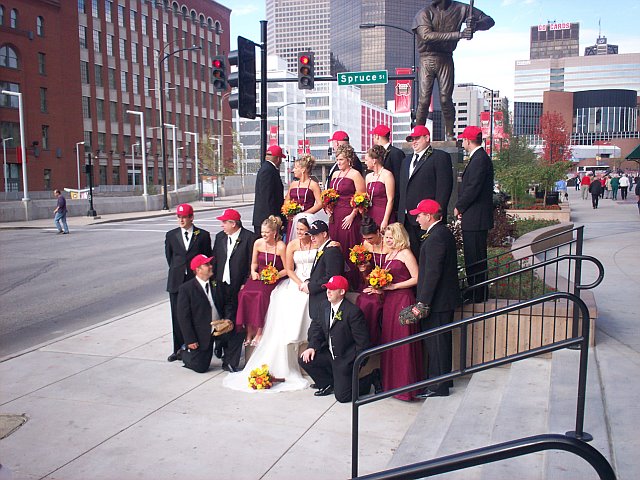 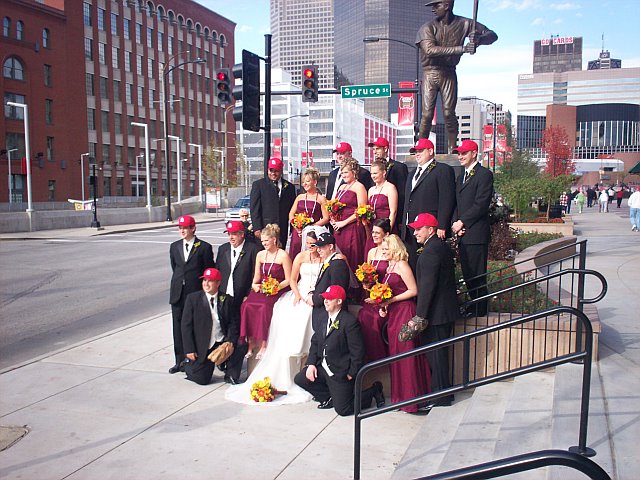 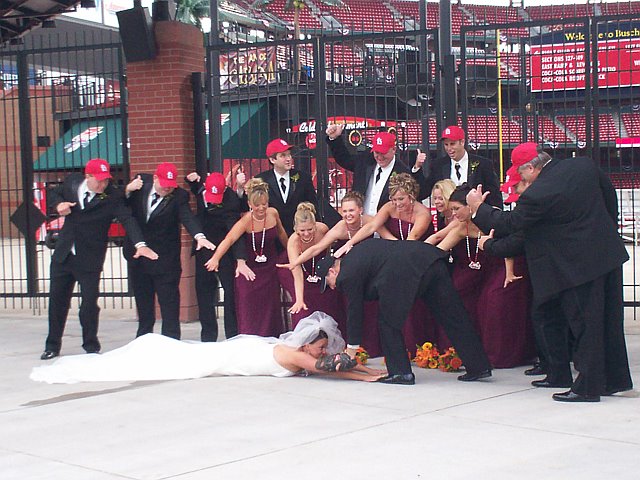 I am so happy that Stan was given this honor while he was still alive to accept it.  It is just one more event in our history that makes me proud to be a St. Louis Cardinal fan.

Posted by April Westerhold at 3:59 PM